A downloadable game for Windows, macOS, and Linux

Something for the 7 Day Roguelike Challenge 2020.

Use the arrow keys to roll around and wack monsters with your spiky shotgun. Press space to fire. There's isn't an end, but 10 is a pretty good score. My best score is 11.

I moved Left as my first move at the beginning because I didn't understand who I was. It'd be nice to have some kind of indicator that displays for a few seconds, lol.

However, the more I've gotten into this game, I'm really digging the Stephen's Sausage Roll style! I think this could be developed more with larger maps and SSR-like Sokoban objectives instead of only squaring off with enemies.

I don't know if you plan to further develop the game or not but two other things come to mind apart from the starting player indicator:

This game could be really cool with further developments, like coins from enemies to spend at an occasional shop with permanent ammo upgrades, purchasable health, or a speed potion that lets you move twice for one turn! 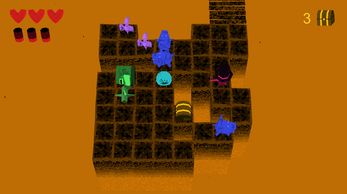 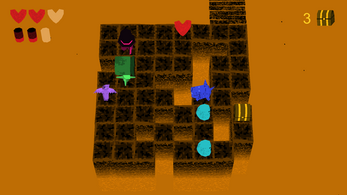